For more than 50 years, the Doppstadt Group has been one of the leading manufacturers of processing solutions for the waste disposal and recycling industry in Germany. A significant part of this is due to the approximately 450 employees at the Calbe site in Saxony-Anhalt, which celebrated its 30th anniversary in September. Doppstadt celebrated the round birthday of its 220 000 m² site in the Salzland district with the employees on 14 October. The company is then looking forward to a celebration with dealers and customers in spring 2023.

The METHOR comes from Calbe, as do the INVENTHOR 6 and 9. Screening machines and the AK series are also manufactured in Calbe. The team there builds 450 Doppstadt machines per year. By 2024, the number should be up to 600. In close co-operation with the team at the headquarters in Velbert, Westphalia, the employees of the development department in Calbe put all their know-how and expertise into innovative, new Doppstadt machines. Employees from Velbert also provide support in the areas of sales and after-sales.

When Doppstadt took over the former VEB (Volkseigener Betrieb) Förderanlagen Calbe 30 years ago, no one imagined that it would develop into one of the largest production sites for recycling machines in Germany. "The plant had great potential. The employees were highly motivated and had a great deal of expertise in plant construction," recalls production manager Reimund Hoffmann about the time of the takeover.

Doppstadt started with 190 employees at the new production site. Today, the company in Calbe employs 450 people – out of a total of 700 in the group. In the first three years, Doppstadt concentrated on the production of conveyor systems in Calbe. Then, in 1995, the first milestone: the construction of the first Doppstadt machine, DW 3080, also called "Mammut". For 25 years, this machine, developed under Josef Doppstadt, was successful on the market. In the same year, the company was renamed Doppstadt Calbe GmbH.

In 2018, another milestone occurred: the team in Calbe developed the INVENTHOR series, which is still extremely popular with customers today. "This was a completely new development that presented us with enormous challenges," says Reimund Hoffmann. In 2013, Doppstadt began building a new 10 000 m² assembly and logistics centre, which was completed in 2016. In addition, six production halls were renovated and expanded. Investments in a combined heat and power plant, LED lighting, a waste heat recovery system and the conversion of the vehicle fleet to (partially) electric models make the Calbe site a role model in terms of sustainability today. In production, digitalisation determines the processes: welding robots, laser cutters and 3D milling machines are used.

For the future, the Doppstadt Group is setting its sights on significant growth at the Calbe location. A further increase in turnover to over € 200 million is expected for 2022. A second assembly line is to be completed this year (2022). In addition, production techniques are constantly being reviewed and optimised with regard to their efficiency. "We want to grow, that‘s for sure," says Doppstadt managing director Michael Simon, setting the course. 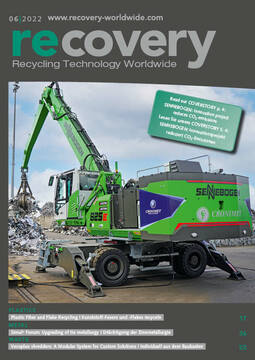 The Inventhor Type 6 is ready to follow in the large footsteps. To succeed in this, the best of both worlds was combined during development: All the experience from the DW 3060 series was...

Global presence, cross-sector product range and specific solutions for individual requirements: Doppstadt heads for the future and showcases a comprehensive product portfolio at the IFAT 2018. There...

Release of the latest generation of two smart shredders

Mobile, modular machines that can be used cost-effectively and flexibly in a wide variety of areas of application and which are distinguished by low investment costs and a fast return on investment:...

Continuously increasing demands are placed on screening machines.  State-of-the-art models such as the SM 518.2 are genuine all-rounders, according to Doppstadt Umwelttechnik GmbH Product Manager...

Expanded by two additional halls, this years IFAT will take place from May 14 to 18 at Munichs exhibition center. At the worlds leading trade fair, more than 3100 exhibitors will demonstrate the...