In the meantime, the fleet of the recycling experts has grown to eight machines: including a 355 E telehandler as an all-rounder on the site since 2019, an 830 E material handler on crawler tracks equipped with an electric drive and an 825 E mobile for flexible sorting and material handling tasks with a quick coupler installed on the grab stick.

Reinhard Recycling AG was founded in 1993 and is based in Bigenthal/Switzerland, located not far from Bern. Thanks to its proximity to the metropolitan region with a population of around one million residents, the material flow of recyclable materials of all kinds remains consistently high: from various metals, to end-of-life vehicles, to industrial and demolition waste. The recycling company, which is managed by Fritz Blaser, recycles and disposes of these materials in an environmentally friendly manner using state-of-the-art technology at the site.

SENNEBOGEN fleet with a total of eight material handling machines

Reinhard Recycling has been a loyal SENNEBOGEN customer since 1994 and has been working with sales and service partner Kuhn in Switzerland for well over 10 years, as they appreciate the dealer‘s consultancy and reliable service. During this time, numerous projects have been implemented to streamline recycling processes on site. The recycling company now operates a total of eight machines, including almost the full range of recycling tools that SENNEBOGEN has to offer: a SENNEBOGEN 830 E material handler in the tracked version with an electric motor that feeds the shear in a partially open hall, two 821 and three 825 mobiles, the latest on site with a quick coupler for flexible sorting of the material, a 643 telescopic crane and a 355 E telehandler as an all-rounder in the narrow sorting boxes.

A special feature? Like the 830 E in the crawler version used by Reinhard Recycling, SENNEBOGEN material handlers are supplied with the striking green paint finish as standard. Fritz Blaser has opted for his own corporate colors for the rest of the fleet, so the machines shine in a combination of eye-catching mint green, ultramarine blue and a red logo on the rear ballast.

The SENNEBOGEN 355 E, with practical details such as the elevating cab, combines the advantages of a telehandler and wheel loader in one machine and impresses with its high processing quality. It completes its tasks with utmost precision and performs both sorting and loading work on the Swiss recycling site: The 355 E is particularly effective at processing the heavily compacted and dense pruning waste thanks to its high breakaway force of up to 85 kN. „We use the 355 E machine wherever it is needed at short notice: Whether for various loading activities or for transporting the used tires with a 3 m³ shovel,“ explains Fritz Blaser. „Even in our narrowest sorting boxes, which are only 3 m wide, it moves in without any problems and remains maneuverable.“

Equipped with a hydraulic quick coupler on the grab stick, the mobile 825 E material handler takes over the pre-sorting of the delivered old scrap in the half-open hall. The change from sorting grab to magnet is effortless and takes only a few seconds. In its role it thus prepares the material for the 830 E electric material handler with 17 m equipment located inside the hall: Thanks to the cylindrical winding motorized cable reel on the undercarriage, the material handler, which is placed slightly above ground, can move along the entire length of the hall if necessary. It uses the 800 l orange peel grab from SENNEBOGEN to pick up the pre-sorted materials and place them safely in the shear.

Thanks to the Maxcab in the industrial version with bullet-proof glass and undivided front windscreen, which can be elevated by a further 2.7 m, the storage areas and the filling area of the scrap shear can be monitored by the operator even better. „With the electric material handler we fill the shear in record breaking cycle times. The machine is a valuable asset for us because it is always ready for use,“ Fritz Blaser comments on the background to the purchase of the 830 E material handler. 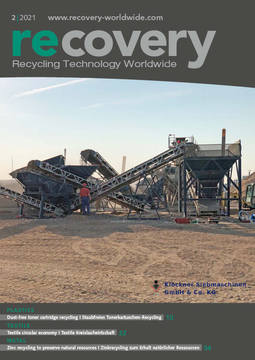 Discover the brand new SENNEBOGEN 19?t battery-powered material handler, the 22?t recycling material handler 8.22 of our new G-series as well as the 4 t telehandler 3.40 G that has just been launched...

Clearaway Ltd. offers a full service in the recycling and disposal of household and industrial waste in South Essex and the surrounding area. The company has a range of roll on roll off skips that can...

Once they have been processed, the single-variety pellets are a valuable resource that can be fed back into the economic cycle. MVM extracts up to 4500 t of metal in this way annually. This is just...

Making its debut at the end of 2017 and developed specifically for the needs of the recycling and waste industry, the 817 E-series is SENNEBOGENs smallest material handler to date. The first...

The regional recycling company OZO in Ostrava, Czech Republic, recently commissioned a new line for processing pre-pressed plastic bales. The heart of the line is an 818 Mobile with an electric motor,...