First-time visitors to Sysplast are directed by their GPS to an easily overlooked ramp when they arrive at the former Grundig site in Nuremberg. Yet what awaits them on the other side of the entrance gate is a far call from what they’re generally expecting. It turns out to be the headquarters of one of the most innovative recyclers specializing in styrenic thermoplastics such as PS, ABS and PC/ABS. Development competence, productivity and quality are the maxims here, and expansion the declared goal of Managing Director Udo Dobberke.

Sysplast’s roots lie in the former Grundig AG, which was located in Nuremberg’s Beuthener Strasse up until the company filed for bankruptcy in 2003. As long ago as the early seventies, attempts were made to process clean and homogeneous plastic residues accumulating during production. The larger Recycling Management Center was subsequently established as a Grundig business unit. The newly founded successor which emerged from the group’s insolvency estate in 2003 began by processing the production waste of a well-known manufacturer of plastic press plates for water filtration. At the beginning of 2020, Udo Dobberke took over the company, since renamed Sysplast, together with one of the Ochtrup Energenta Group’s Managing Directors (www.energenta.de). Today, as a member of this group, which covers the complete cycle of recyclable materials from collection to recycling and thus retains full control over every step, Sysplast stands for the entire value chain of a closed-loop economy.

Sysplast currently produces about 40 tons of recompounds per day and employs 14 people, 11 of them in production. This figure divides into 70 % ABS, 20 % PS and 10 % PC/ABS - quantities that, according to Dobberke, are nowhere near sufficient to cover demand. At the heart of this state-of-the-art plant is an extruder Leistritz-built (see Fig. 1) that went into operation in 2021. The regrind processed here comes from rigorously selected regional suppliers as well as, in particular, energenta recycling solutions GmbH. Like Sysplast, this company is part of the Ochtrup Energenta Group. Energenta processes plastics from recycled waste electrical and electronic equipment (WEEE) as well as post-industrial and post-consumer mixed plastics into defined, clean regrind, which it separates into almost homogeneous materials.

Dobberke: “Our customers particularly value the fact that the entire process – including collection, logistics, grinding, separation, and ultimately also extrusion into as-new granules – takes place under one roof, namely within the Energenta group of companies, so that they get everything from one source. That way, we directly control the quality of our end product and our customers can see exactly where our raw materials were sourced.”

Even carefully chosen input (Fig. 2) still contains a certain proportion of contaminants in the form of metals, foreign plastics, silicones, paper, etc. Maintaining demanding recompound qualities therefore requires filtration of the processed melt before it is extruded into strands in the die. Here, too, Sysplast sets the bar very high.

In order for the products to be of the same high standard as virgin material in terms of both processing and usage properties, the filtration system must ensure that even the tiniest contaminating particles are reliably separated. Only recompounds produced in this way stand a chance of becoming established as a raw material that is in constant demand with Sysplast’s regular customers – the electronics industry including telecommunications and consumer electronics, and also the automotive sector.

“High throughput and high filtration performance are basic requirements for us in the search for the perfect filter,” says Dobberke. Yet that alone is not enough for him: “We also expect that performance to be available reliably and consistently over long runtimes. Clogged screens and filter changes mean fluctuations in production that we’re neither willing nor able to afford.” And there is one more condition his ideal filter must meet: “We produce high quality granules for high quality applications. That’s why the filter should reliably separate contaminants, but do so with only minimal melt loss.”

Convinced by the self-cleaning principle

As a result of these challenging specifications, high performance filters in the Ettlinger ERF series are used to clean the melts at Sysplast (Fig. 3). Karsten Bräunig, Sales Manager, explains: “The rotating, perforated drum is a characteristic feature of all our filters. The melt continuously flows through it from the outside to the inside and is available with different screen sizes. A dynamic scraper continuously scrapes off all foreign matter larger than the selected screen from the drum surface before feeding it to the discharge system. Screen changes are comparatively rare thanks to this self-cleaning principle,” Dobberke confirms. “Our machine typically runs nonstop five days a week in three shifts with a constant output.”

In fact, the newly installed ERF 350, which has a filter area of 1570 cm² and a maximum throughput of 3800 kg/h, is not the first melt filter of its kind at Sysplast. The previous production lines had already been reaping the benefits of this series and its ultra-efficient operating principle for around 20 years with two filters of the smaller ERF 200 type (Fig. 4). “Our decision for Ettlinger was also grounded in our good experience in the past. I’m not just referring to the filter itself here but also to the support we get from the manufacturer if ever any problems occur in production or in the rare event that we need spare parts,” Dobberke continues.

Looking beyond to surface-coated plastics

Dobberke (Fig. 5) sees the current market position as no more than a first step. By participating in forward-looking projects, he plans to turn Sysplast into a center of innovation when it comes to recycling styrenic thermoplastics, venturing far beyond the mere reuse of plastics from electrical and electronic waste. Following extensive investigations of the existing waste streams, two basic objectives have emerged.

Processing of electroplated plastics – significant amounts of which traditionally accumulate during production processes in the automotive industry as well as in the sanitary and household goods sectors but which have simply been disposed of in the past – is meanwhile well advanced. The substrate here is usually high quality ABS while the coatings are made of copper and nickel. Together with the Fraunhofer Institute for Process Engineering and Packaging in Freiburg (Fraunhofer IVV), Sysplast has come up with a process in which both the plastic and the metals are completely recycled. Among other things, it was due to this activity that the company was named a winner in the first edition of the Bavarian State Ministry for the Environment and Consumer Protection’s Resource Efficiency Award in mid-2021. Today, Sysplast already has fixed contracts with electroplating companies concerning the acceptance of production residues, processing into homogeneous materials and the return of its own recompounds in a closed cycle. The contractually agreed quantity presently adds up to some 2000 t/a.

Here, too, the Ettlinger filter is making a significant contribution because Sysplast uses it to remove residual particles from the melt following metallization. Their share is comparatively high for reasons related to the input. Conventional filter disks quickly clog under these conditions and require frequent changing. With the 80 µm screen size selected here, the ERF 350 ensures uninterrupted purity of the recompound with no metallic contamination and with constant pressure at the die head.

The discharge (Fig. 6) contains a very high proportion of contaminants, so that the amount of plastic lost for recycling is minimal. This process has been running in serial production at Sysplast since the end of 2021.

Sysplast is currently collaborating on a second groundbreaking project with the Institute of Plastics Engineering at the University of Erlangen, namely recycling of painted, vapor-deposited and laminated car bumpers. The first trials were altogether successful.

Dobberke’s goals are clearly defined: to expand existing activities and upscale development projects to industrial levels. “We set out in 2020 with an annual throughput of 3000 t of recycled styrenic plastics. The 40 t per day we achieve in the meantime add up to around 10 000 t/a based on our 5-day week. Given the high demand for our products, we want to increase this value fivefold by the end of the decade. In terms of performance and innovation, that will put Sysplast up among the top recyclers in the German-speaking world for this material group.”

The first steps along the way are precisely marked out: there are plans to commission a second new machine in 2022, which will increase capacity by 17 000 t/a. A further 1500 t/a will be possible after upgrading a currently decommissioned filter. For Dobberke, there’s no question about it: Ettlinger’s tried-and-tested melt filter will once again be an integral part of the system. 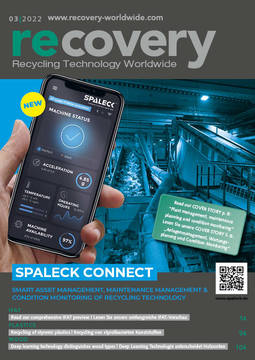 Ettlinger, a member of the Maag Group, will take advantage of the upcoming K 2019 to unveil the brand new ERF 1000 high performance melt filter for very high throughputs in recycling applications...

In this interview, Robert Obermayr, the head of this new EREMA business unit, talks about the background and new technical developments and he explains why the Laserfilter in particular is so...

These continuous filtration systems are characterized by a filter disk on which the screen cavities are located in a ring pattern. Screens can be changed on the part of the filter disk that is not...